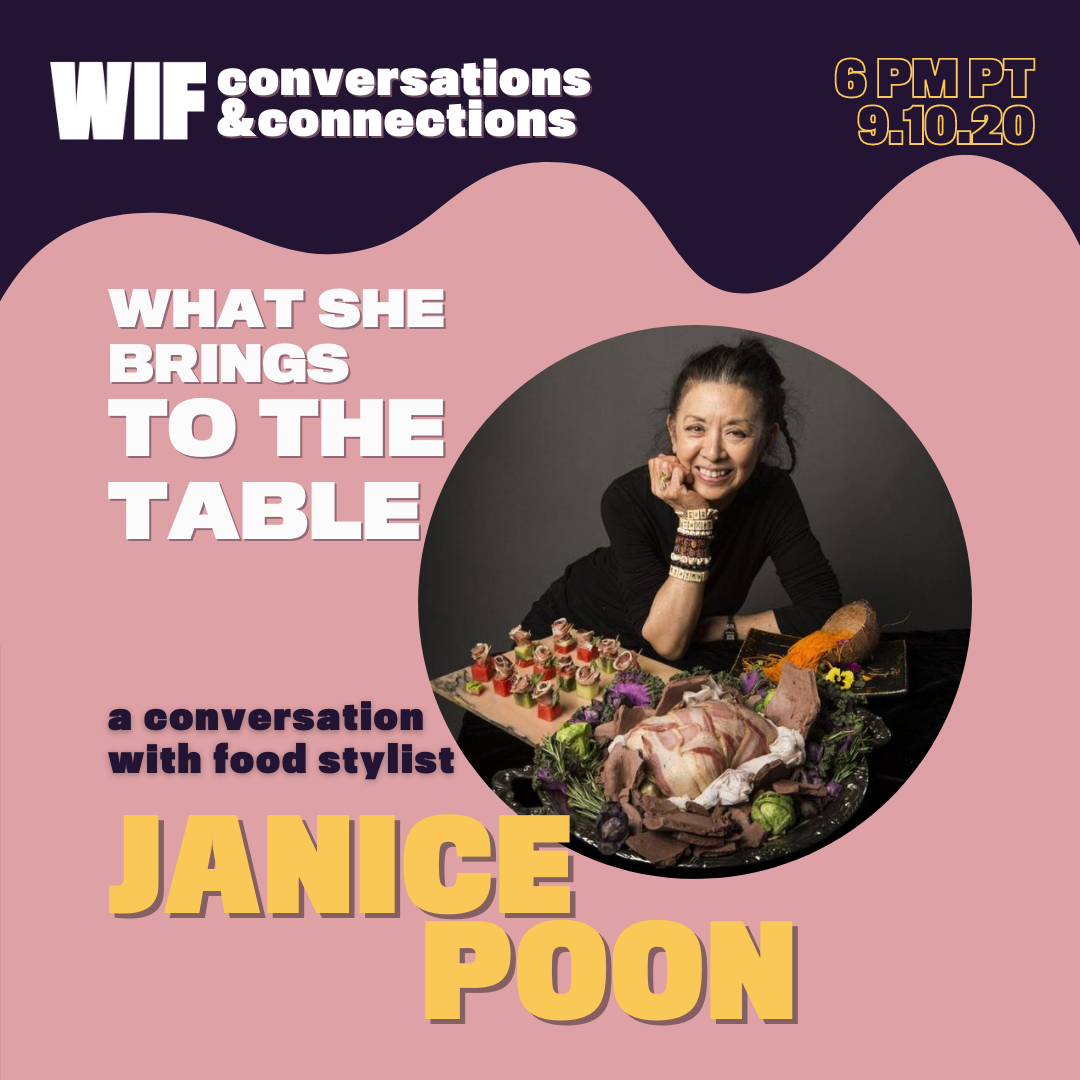 Conversations & Connections: What She Brings to the Table—A Conversation with Food Designer/Stylist Janice Poon

Join WIF for a fascinating conversation with writer, designer, and food stylist Janice Poon as we discuss her work constructing edible masterpieces for "Hannibal," "American Gods," and "Star Trek." Pull up a chair and tuck in to a savory chat about Poon's career across genres, where she makes the devilish look delectable, and the monstrous look positively mouthwatering.

After graduating from Burnley Art School in Washington, Janice started out as an art director for a large advertising agency where her main clients were McDonald’s, Kraft and Maple Leaf. Directing shoots for these food clients, she gained her first exposure to the intricacies and possibilities of food styling. But she soon found the bureaucracy and misogyny of ad agencies in the 70s to be untenable.

She walked away from this MadMen’s world to open a tiny boutique near Toronto’s “Mink Mile” where she was discovered by a Saudi socialite who enthusiastically introduced Janice to her royal circle. Designing ballgowns for princesses took Janice on a silk and gemstone paved journey from New York to Paris and London to Riyadh and although fulfilling the fashion desires of the idle rich seemed frivolous and superficial, it exposed her to a world of sumptuousness that still informs her work today.

The recession closed Janice’s salon de la haute couture but she survived the financial downturn by designing and writing cookbooks – which brought her back to photo studios and food styling. Only this time, the food was much changed from the fast-food subjects of her ad agency work. It was richer, more textured and layered with history and meaning. So when the opportunity arose for Janice to replace the food stylist for A&E’s production of Nero Wolfe, she was fully prepared to step in.

For a food stylist, Nero Wolfe was a dream project: a period piece about a detective who was a gourmet with a voracious appetite – and whose crime-solving mental skills worked best when he was over-eating. The series ran for two seasons after which Janice returned to art and writing – this time, graphic novels for kids. And it was while struggling with a rewrite of her third novel, she was asked to return to food styling for a new show, Hannibal.

Thinking that cannibals and murder might be a refreshing change from kittens with mittens, Janice put down her children’s books and went back to filmwork, moving from NBC’s “Hannibal” to “American Gods” and “Star Trek Discovery”.  Working on projects like Suicide Squad, Shape of Water, Handmaid’s Tale, Condor, High School Zombie Musical, The Boys and Mrs. America, Janice continues food styling based in Toronto, Canada, with a planned post-Covid return to Ireland to do Imperial dinner scenes for Apple TV’s much-anticipated series based on Isaac Asimov’s “Foundation”. And, yes, still grinding out the manuscript for that third novel.