Join WIF for an evening with the world-renowned director, writer, and actor Cheryl Dunye as we discuss the ambition, vision, and brilliance of her three-decade career creating magic on the screen. Since her emergence as a vital part of the "Queer New Wave" in the 1990s, Dunye has been creating stunning works of art for the large and small screen, from the classic WATERMELON WOMAN to recent work on Ava Duvernay's QUEEN SUGAR. 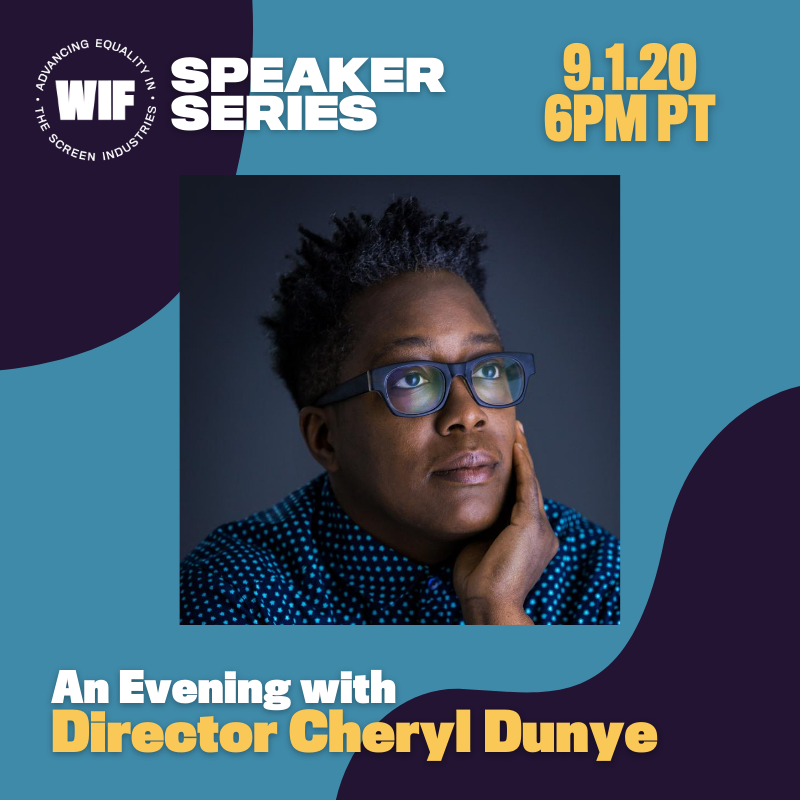 Cheryl Dunye is a world renowned African American director, writer, and actress. She first emerged as part of the "Queer New Wave" of young filmmakers in the early 1990s. Her first feature film, THE WATERMELON WOMAN, won the Teddy Award for Best Feature at the 1996 Berlin International Film Festival. The film, now considered a classic, was restored and re-released widely in 2016 for its 20th anniversary, and resides in the permanent cinema collection at the Museum of Modern Art in New York City.

Her second feature, HBO's STRANGER INSIDE, premiered at the Sundance Film Festival in 2002 and was nominated for four Independent Spirit Awards including Best Director. In 2004, she directed MY BABY'S DADDY for Miramax, which had a budget of $12M USD. Her more recent independent features THE OWLS (2010) and MOMMY IS COMING (2012) have both screened at top-tier festivals and garnered her a new generation of fans and followers across the globe.

In recent years, Cheryl has entered a new wave of her career as a director for episodic television, first by joining Ava DuVernay and Oprah Winfrey for two episodes on Season 2 of OWN'S QUEEN SUGAR. In 2019, she served as the Producing Director of QUEEN SUGAR Season 4. Her other episodic directing credits include an incredible array of popular shows - CLAWS for TNT, THE FOSTERS for Freeform, LOVE IS_ for OWN, THE CHI for Showtime, STAR for FOX, DEAR WHITE PEOPLE for Netflix, DAVID MAKES MAN for OWN, LOVECRAFT COUNTRY for HBO, ALL RISE for CBS, among others.

In 2015, Cheryl's multi-award winning short film BLACK IS BLUE was named one of the top five "Must See Feminist Films" by Indie Wire. It is now being developed into a feature film with Laverne Cox attached to star in the lead. In 2016, Cheryl was named a recipient of the prestigious Guggenheim Fellowship in the field of Filmmaking. That same year she was invited to the Academy of Motion Picture Arts and Sciences (AMPAS). In 2018, it was announced that Cheryl would adapt and direct a feature based on Jason Mott's novel THE WONDER OF ALL THINGS for Lionsgate. In 2019, she launched her Oakland-based production company called

WN FILMS, which is actively developing two episodic series – THE GILDA STORIES, an adaptation of the beloved 1991 queer vampire novel by Jewell Gomez and ADVENTURES IN THE 419, based on Nigerian scammers.

She is currently represented by Chris Ridenhour and Jack Leighton at APA.