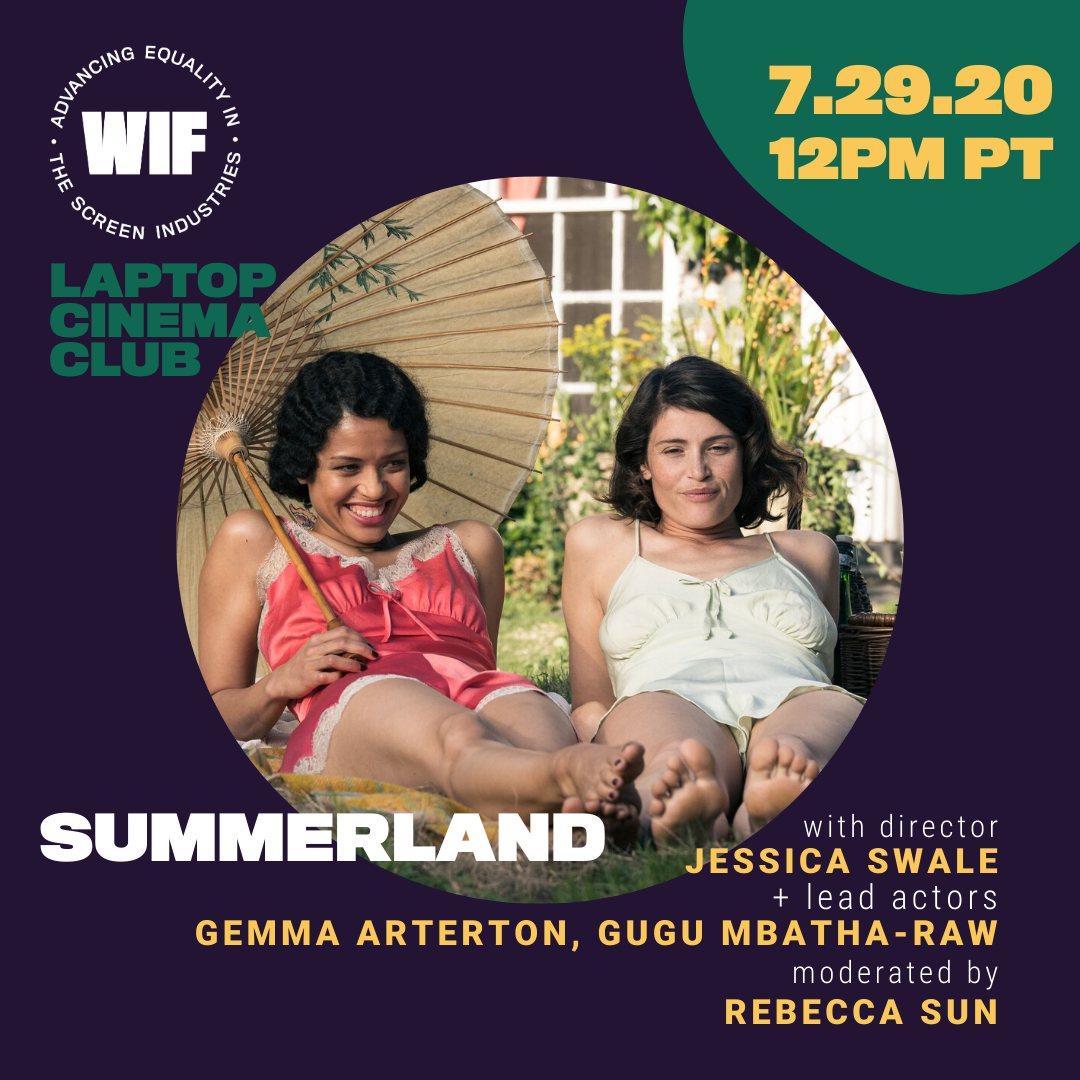 Join WIF and writer/director of SUMMERLAND, Jessica Swale in conversation with stars, Gemma Arterton and Gugu Mbatha-Raw. This conversation will be moderated by journalists Rebecca Sun. SUMMERLAND follows Alice (Arterton) who is a reclusive writer, resigned to a solitary life on the seaside cliffs of Southern England while World War II rages across the channel. When she opens her front door one day to find she’s to adopt a young London evacuee named Frank, she’s resistant. It’s not long, however, before the two realize they have more in common in their pasts than Alice had assumed.

About JESSICA SWALE (Writer and Director)

Jessica Swale is an Olivier award-winning writer and director, hailed as one of Variety’s Top Ten Brits to watch in 2019 and one of five recipients of BAFTAS JJ Screenwriting Bursary Awards.
Originally a lauded theatre director, Jessica began her career by setting up Red Handed Theatre Company, to create lively new versions of classic plays, and was quickly named the “best young director of period comedy” by The Guardian. She went on to win the Peter Brook Award for Best Ensemble in 2012 and an Evening Standard Theatre nomination as ‘Best Director’ for THE BELLE’S STRATAGEM in 2012. Other directing credits include FALLEN ANGELS (Salisbury Playhouse), WINTER (TFL, Canada), THE SCHOOL FOR SCANDAL (Park Theatre/ Theatre Royal Bury St Edmunds), THE BUSY BODY, THE RIVALS, SOMEONE WHO’LL WATCH OVER ME (Southwark Playhouse), PALACE OF THE END (Arcola), and her own adaptations of SENSE AND SENSIBILITY and FAR FROM THE MADDING CROWD (Watermill, Newbury). In 2010, Jessica directed the first play by a woman ever to be staged at Shakespeare’s Globe Theatre with Nell Leyshon’s BEDLAM.
Then moving into writing- somewhat accidentally- Jessica’s first play BLUE STOCKINGS was a runaway success. “A lively and eye-opening piece” (Paul Taylor, Independent) which premiered at Shakespeare's Globe Theatre in 2013, it led to great critical acclaim and won her a nomination for ‘Most Promising Playwright’ at the Evening Standard Theatre Awards. BLUE STOCKINGS has since become a set text on the UK GCSE Drama Syllabus and is one of the most performed plays in the UK. The play follows the fortunes the country’s first female university students, a rebellious band of young women, at Girton College Cambridge through the 1890s. Jessica is currently developing the tv series version.
Her second play, NELL GWYNN, an original comedy, transferred from a sell-out run at Shakespeare’s Globe to the West End, where it won Best New Comedy at the 2016 Olivier Awards. NELL GWYNN is explores the life of one of the first female actresses, Nell Gwynn (played originally by Gugu Mbatha Raw, then by GEMMA ARTERTON in the West End), from her time as an orange seller to starring onstage and her life as the King’s escort.
Now writing regularly for film and tv, Jessica’s other work includes HORRIBLE HISTORIES THE MOVIE! (Altitude, 2019) and the upcoming films NELL GWYNN (Working Title), LONGBOURN (Studio Canal), PERSUASION (Fox Searchlight) an original romantic comedy for STUDIO CANAL and a new TV series for Left Bank.
An active member of Times Up, Jessica also wrote and directed TV short LEADING LADY PARTS (2018) featuring Tom Hiddleston, Emilia Clarke, Gemma Arterton, Florence Pugh and Gemma Chan, which has to date had more than 45 million views.
SUMMERLAND is Jessica’s debut feature film. It is based on her own original screenplay, which she wrote after becoming one of five recipients of the BAFTA Screenwriter’s Bursary. It will be released by IFC Films on July 31st.
Jessica is author of a best-selling series of DRAMA GAMES books, published by Nick Hern (DRAMA GAMES for Classrooms and Workshops and DRAMA GAMES for Devising; DRAMA GAMES for Rehearsals is due out in 2015). She is currently writing her first novel.

Gugu Mbatha Raw is an award-winning actor of the stage and screen. Her stage performances include HAMLET (2009) alongside Jude Law in the West End, ELSINORE in Denmark and Broadway, and NELL GWYNN (2015), for which she was nominated for ‘Best Actress’ at the 2015 Evening Standard Theatre awards.
In film, Gugu has starred in LARRY CROWNE (2011) alongside Tom Hanks, and period drama BELLE (2013) for which Gugu won Best Actress at the 2014 BIFA Awards. She has also starred in CONCUSSION (2015) alongside Will Smith, THE WHOLE TRUTH (2016) starring Keanu Reeves and Renée Zellweger, MISS SLOANE (2016) with Jessica Chastain, FREE STATE OF JONES with Matthew McConaughey and BEAUTY AND THE BEAST (2017) where she played the playful character of Plumette.
In 2016 Gugu starred in SAN JUNIPERO, the only episode of Netflix anthology series BLACK MIRROR ever to offer a happy ending. It has been widely celebrated by both critics and the viewing public since its release as a socially important and otherwise enrapturing piece of art. Starring Gugu Mbatha Raw and Mackenzie Davis, the episode had higher critical ratings than the show's other episodes, and some critics considered it one of the best television episodes of 2016. In addition to several other accolades, "San Junipero" won two Primetime Emmy Awards in the Television Movie and Writing for a Limited Series, Movie, or Dramatic Special categories.
In 2018, Gugu starred in Disney’s blockbuster fantasy A WRINKLE IN TIME opposite Oprah Winfrey and Reece Witherspoon whilst also appearing in romantic tragicomedy CLOVERFIELD PARADOX and comedy drama IRREPLACEABLE YOU. She also appeared in film drama FARMING, based on the writer/director’s Adewale Akinnuoye-Agbaje childhood which tells the story of a young Nigerian boy, ‘farmed out’ by his parents to a white British family in the hope of a better future. Instead he becomes the feared leader of a skinhead gang.
This spring Gugu plays lead superhero ‘Ruth’ in supernatural thriller, FAST COLOR which follows Ruth as she is forced to go on the run when her superhuman abilities are discovered. Later in 2019 she will star in MOTHERLESS BROOKLYN alongside Ed Norton, Bruce Willis and Willem Dafoe which tells the story of a lonely private detective afflicted with Tourette's Syndrome, as he ventures to solve the murder of his mentor and only friend, Frank Minna.
Furthermore, 2019 will see Gugu appear alongside Angelina Jolie and Michael Cain Peter Pan in COME AWAY, the prequel to Peter Pan and Alice and Wonderland. She will also appear in Apple TV drama series MORNING SHOW starring Billy Crudup, Jennifer Aniston, Reese Witherspoon, and Steve Carell. The series explores the unique challenges faced by the women and men and who carry out morning TV.
Gugu has recently completed filming on the anticipated pageant comedy drama MISBEHAVIOUR where she will star alongside Kiera Knightly and Jessie Buckley. The screenplay comes from Rebecca Frayn, with revisions by Gaby Chiappe, and is based on the true story of the first black woman to win the Miss World competition.
She has just recently finished filming for her lead role in humanitarian drama SEACOLE which follows the story of Mary Seacole, a Jamaican doctor who sought to work with Florence Nightingale during the Crimean War.

Rebecca Sun was most recently a senior reporter at The Hollywood Reporter, where she covered the business of entertainment and wrote about inclusion and representation in media. In 2019, the nonprofit collective Gold House named her to the A100 list of the most impactful Asians and AAPIs in culture. Her work has been recognized via GLAAD Media and Southern California Journalism Award nominations, and she has received a National Arts & Entertainment Journalism Award. Prior to moving to Los Angeles in January 2013, she spent eight years as a writer and editor at Sports Illustrated in New York. A native of the Bay Area, she earned a master’s degree in journalism from NYU and a bachelor’s degree in biology and English from Duke University.