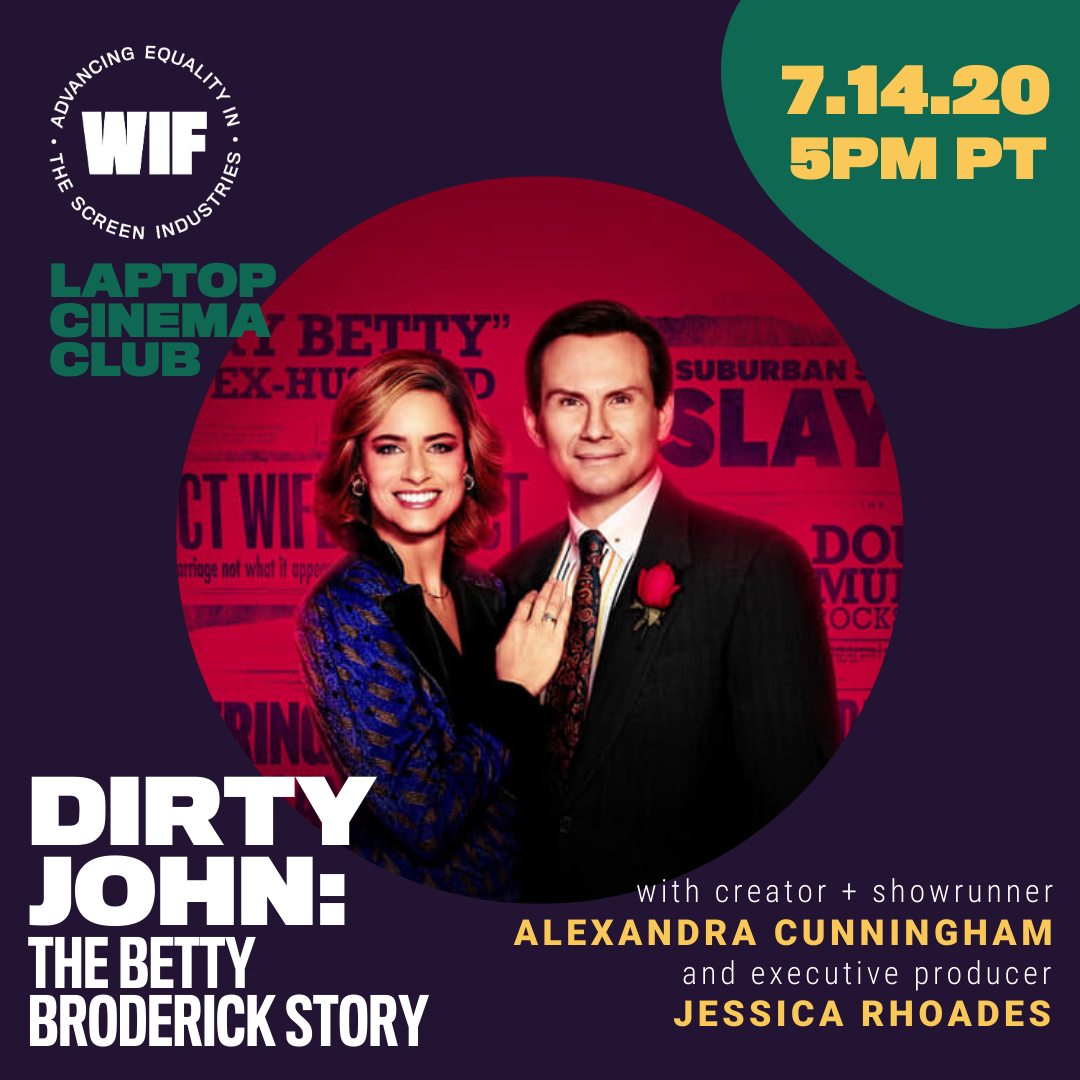 Join WIF for a fascinating discussion with "Dirty John" creator/showrunner Alexandra Cunningham and executive producer Jessica Rhoades. DIRTY JOHN: THE BETTY BRODERICK STORY, starring Amanda Peet and Christian Slater, is based on a true story of love gone wrong – spanning the ‘60s to the '80s through the breakdown of a marriage that Oprah deemed one of “America’s messiest divorces,” before it ended in a double homicide.

Alexandra Cunningham is the creator, showrunner and executive producer of “Dirty John,” based on the hit LA Times podcast of the same name, which aired its first season on Bravo.  Season two, “Dirty John: The Betty Broderick Story,” premieres on USA Network June 2, 2020, and stars Amanda Peet and Christian Slater.
Cunningham began her television writing career on “NYPD Blue.”  She has since written and produced such shows as “Rome,” “Desperate Housewives,” the American remake of “Prime Suspect,” “Bates Motel,” “Aquarius” and most recently, “Chance” starring Hugh Laurie on Hulu
Cunningham graduated from Johns Hopkins and Columbia, and was a playwriting fellow at the Juilliard School.

Jessica Rhoades has committed her career to fostering creative voices, and in 2018, launched her production shingle, Pacesetter Productions, to focus on bringing the projects of new and established writers to life.
Rhoades is an Executive Producer on season two of the hit Alexandra Cunningham-created series “Dirty John,” which moved to USA Network from Bravo for its second season.  This season focuses on the Betty Broderick story and stars Amanda Peet and Christian Slater, and is set to premiere on USA on June 2,2020.
Rhoades is also an Executive Producer on Gillian Flynn’s Amazon Studios straight-to-series project “Utopia,” which is based on the Channel 4 hit series, and she recently joined the HBO Max limited series “Station Eleven,” from creator Patrick Somerville, as an Executive Producer.
Rhoades executive produced the critically acclaimed “Sharp Objects” for HBO, based on the novel by Gillian Flynn and adapted by Marti Noxon, starring Amy Adams and directed by Jean-Marc Vallee.  “Sharp Objects” was nominated for 3 Golden Globes and 8 Emmys, including nominations for Best Limited Series for both.
Rhoades served as Executive Producer on Showtime’s “The Affair,” having joined the acclaimed series in its fourth season, which aired in 2018, and continued in that role for its fifth and final season.  She was also an Executive Producer on Mike Daniels’ “The Village,” the 1-hour drama series which aired on NBC last year.
Previously, Rhoades was the Head of Television at Blumhouse Productions, working to launch, build, and differentiate the Blumhouse brand for television.  Prior to that, she had been an independent producer for 15 years, producing scripted and unscripted series for Bravo, E!, Nickelodeon, and TLC, and partnered with actress Ashley Tisdale at Tisdale’s Blondie Girl Productions for series and movies for Disney Channel and Freeform.
Rhoades has a Masters of Fine Arts from the selective Producer’s Program in the School of Theatre, Film, and Television at UCLA.  She currently serves on the Board of Trustees of the Hollywood Schoolhouse and volunteers for No Kid Hungry as Auction Chair of Taste of the Nation, their annual Los Angeles fundraising effort.  Rhoades lives in Los Angeles with her husband, who is a federal prosecutor, and their two children.